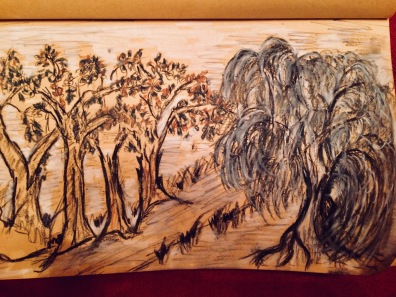 Once upon a time there lived a girl named Meredith and she lived in New York where she went to Culinary School near Greenwich Village. Her father was an Art History professor who taught at the University near Meredith’s school. One day they agreed to meet at a nearby coffee house in between classes.

While waiting for her father to arrive Meredith had a serendipitous moment where her entire world changed instantly.. She met Jack. they had an immediate connection. Jack was a professional photographer and a traveller. It wasn’t long before they married and moved away to a quaint town near New Orleans called Ruston in Louisiana. At first they were very happy together but just as quickly as they had met and fell in love, the problems began and intensified until one day Meredith came home to find Jack packed and ready to move on. .. Without her.

Meredith had a difficult decision to make; go back to New York or remain in Ruston and try to build a life for herself in this mystical and quiet town.

She had made one true friend these past years, Emily… who encouraged her to follow her dream of opening a Café…. in Ruston. Meredith decided to take a chance, purchasing an old dark, building with stained glass bay windows and a chandelier that sparkled so brightly, it illuminated the entire room. Within weeks she had worked day and night, cleaning, organizing, preparing, until the pink vintage cake stands were positioned perfectly and each candle holder carefully placed on the tables ensuring a romantic and warming ambience. She called her café … Moondust.

Up until this point our story has been straightforward… but once Moondust opened its doors.. the magic began and nothing would ever be the same for Meredith and the townspeople of Ruston.

Moondust wasn’t just an ordinary café, the building and location had history, and a mystical secret that it appears only Meredith wasn’t aware of.

One shadowy evening soon after the opening Meredith discovered she wasn’t alone in Moondust… this is where she met Cameron… he appeared to her …drawn to her kindness and her laughter, he also needed someone to trust and he took a chance .. On her. It had been years… twelve to be exact.. Since the “accident” that ultimately left him in this state… in between life and death.. A ghost? An angel?.. A fallen angel.

Cameron brought enchantment, mystery and … a supernatural family secret that would place Meredith into the path of danger.. Knowing he needed to stay away from her he tried to do so but she wasn’t afraid.

Meredith had a fire in her that her mother always hoped remained dim, and perhaps it was a big reason their relationship had been strained. She was special and Cameron was also drawn to this aura she gave out. He needed to find a way to move forward and she wanted to help him .. Together the secret of Cams past brought them closer … and a deep affection for each other grew..

Willow trees and whispering winds, whimsical moments.. Delectable sweets and cinnamon coffee… it all becomes entwined in this tale. Wherever Cam emerged so did his Willow tree.. Ruston was known for aged Oak and Maple trees but the Willows were not grown in this part of the south… however the tree appeared when the wind blew softly and the magic surrounded the town.

Moondust brought Meredith delight, fulfilment, friendships and true happiness, but along with all its glory this little shop on the corner of Vienna and ……. Included danger, an ancient family heirloom that could destroy anyone who wasn’t entitled to it, secrets, and lies and murder.. It brought spirits, passion and ….love.

Perhaps one day you will be able to read the entire story and let me know what you think of Moondust.. as my journey to publish is a long one, I wanted to share a piece of it with you…. And hope that you might want to hear more of this magical tale.. Without revealing too much I am sharing a piece of my heart with you tonight… .

My drawing of Willows represents Cameron .. He is .. Magic and so are these Weeping and wonderful Willow trees.

Eventually Meredith has to deal with leaving Cameron and Moondust behind, she has packed her bags, the people that have stood by her are there to help her get back home .. To leave the memories of Ruston behind..

And as she loads the last suitcase she looks over at the sold sign on her little cottage home with a wraparound porch..

So many hopes when she first arrived with Jack, the memories quickly turn to Moondust , the timeworn building with so much mystery, the sparking chandelier and all the delicious smells that filled the air while she lived out her dream of being a shop owner, chopping, preparing, creating and baking .. This part of the story tears at my heart.. All she ever wanted was to create to share and ..To love…

The outdoor lantern has been left on leaving a warm glow.. A reminder of all that’s happened.. And as she takes one final look across the street she doesn’t see the Willow any longer.. Disappearing as magically as it had appeared confirming it’s time to go. With memories flashing quickly through her mind of Jack, Moondust,.. An enchanting fallen angel, and all that had been uncovered here.. She smiles….takes in a deep breath and says good bye to Ruston … for now.

Please click on to the link: The song could not be any more perfect for Meredith and her journey as she closes her eyes, and whispers farewell to all that she has loved .. But hey.. Don’t fret.. The story is far from over.. not for Meredith, or her Sprinkles of Moondust.

Please click on to the link: The song could not be any more perfect for Meredith and her journey as she closes her eyes, and whispers farewell to all that she has loved .. But hey.. Don’t fret.. The story is far from over.. not for Meredith, or her Sprinkles of Moondust.

She will breathe… again

2 thoughts on “On this October eve.. let me tell you a story”